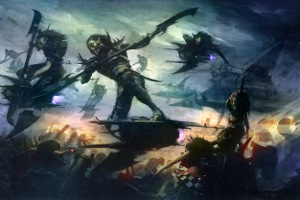 From the Journal of Gallon Senal Sai Duth Ad

The greatest poets of pain could not describe the hate I am feeling. It is a seething mass at the core of my being. A mass that should be filled with ambition and a search for even greater painful pleasure. And yet, only hate remains, for my station has fallen further than I could have ever foreseen. I was one of the greatest warriors and leaders of the House of the Claw. Only a few warriors were proven to be a match to my tactical brilliance and they were only a higher rank because of seniority. I was already planning a few subtle traps of my own to remove them myself. All those plans needed was for me to rise up a few more ranks through a few successful missions.

It was suppose to be a simple retrieval. An eldar spirit stone lost for who knows how long. Our own records are themselves somewhat lacking in that regard. Unlike our cousins wasting their lives in their craftworlds, we tend not to put much effort into preserving our past. The present and its delectable new sensations and pains are much more relevant. Still, the potential is interesting. Did the stone come from some fallen soldier or great hero? Perhaps it might have been a craftworld leader, attacked on his way to some vital mission. Either way, it would have been fun to torture the individual. To feel their screams as we slowly released its soul into the warp to be devoured by Slaanesh. But alas, it was not so.

A human tricked me Journal. A! HUMAN! MANIPULATED! ME! I, who have flayed the skins of my enemies and heard their beautiful screams. I, who once ransacked a city of 100,000 with only a few reaver jetbikes and a dream. I, who was well on my way to becoming the archon’s right-hand torturer, was left with nothing but embarrassment. My enemies took the opportunities, just as I would. I had to stave off death attempts and kept only half of my holdings, but I survived. I was lower in station, but at least I still had the chance to rise again. I had kept my precious collections of trophies and my leadership position at the local arena. Yet, perhaps it was better if I had let those be taken as well, for those two properties became my undoing.

I had attacked the blasted captain’s ship, not to conquer, but to take prisoners. I could have easily taken it, but the goal was to destroy the morale of him and his crew. Little attacks, taking crew to be â€œservicedâ€ by my people. Maybe returning a few during each raid to show what happens to those who serve Renaldo Macharius.

And although the first attack was a success, the human prisoners destroyed me. No, it wasn’t the prisoners. It was the dark eldar warrior with them. Although there is no proof, I know that the House of the Shifting Dagger was involved. Their house has been trying toÂ supersedeÂ mine for generations. Through me, they have gotten an edge and forced me to run, chased by my own house in retaliation for my blunder. I escaped to my ship and was forced to leave all my holdings to my rivals. I was once again just a simple pirate lord, hitting targets of opportunity, like I was when I was a simple child of 80.

I feel so low, so worthless. Oh journal, how I have fallen. Before, my ambition burned like fire but now, its fire is dim. It has been replaced by another. A fire of revenge on that worthless human who dared trick me. He was the start of my problems and I know I can’t rise again until he is on my table. His skin flayed, his organs in jars, and his mind probed to discover every single pain center.

I can look forward to one immediate thing though. The end of this particular journal. Every section of this human’s skin has been written on. I can now skin it alive and turn that skin into pages. I think I will like this one. This particular human had a very reddish skin tone, forcing me to go with a white ink to make it really stand out. I like the effect. Very modern.