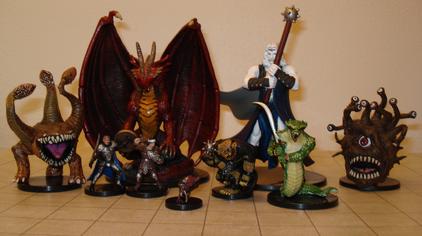 When we talk about â€œworld buildingâ€ on this site, we usually mean constructing a setting for a game from either the ground-up or modifying some aspect of an established game (Shadowrun, D&D,etc) that gives a new spin on it. This can be a daunting task, since even a small change in the interconnected fixtures of a setting threatens to knock the entire thing off balance. Still, the use of on-the-fly imagineering (Storyteller use of mental duck-tape and just plain lying) can help you keep the ship afloat. When you see a hitch in the setting youâ€™ve created, you can simply explain it away with some bullsh*t and make a note to fix it later. The players are none the wiser and your position as ruler of the narrative is established.

The problem Iâ€™ve been running into recently, however, is literal world building. Like, with miniatures and stuff. Asking your players to imagine an ominous warehouse or bustling marketplace is one thing, but itâ€™s entirely different to illustrate the point with actual illustrations. Certain games (like Savage Rifts, the catalyst for this post) bake miniature use into the mechanics of the game. You can try to shorthand it, drawing crude lines on a piece of grid paper or using an erasable board, but youâ€™re still on the hook for information that your players reasonably expect: Exact distances, height and material of objects (â€œis that a wooden barrel or a metal one?â€) and â€œwait… David, are those trees? So, there are just trees in the middle of the warehouse? Okay, just checking.â€

â€œHow tall are the trees? Can I climb them?â€

In these situations, your players are honestly asking for info that their characters would get with a glance around their surroundings. The problem is this: Preparing for a game went from â€œWriting a Story for the playersâ€ to â€œWriting a story and Set Dressing for dramatic events.â€ It adds a huge chunk of time onto the process of preparing a game and can add a complexity that is great for your players but a huge pain to you. My advice? Triage and childrenâ€™s toys.

First, figure out where major things are planned to happen and then keep a list of other spaces in your game. If the warehouse is where a hostage swap is taking place, then draw out the place before hand with detailed notes on the objects in the area. If there are other locations that the players may go to but you donâ€™t expect things to get crazy (and therefor wonâ€™t necessitate miniature placement and such) then keep a list of those places in your notes with a brief description of the area. This will both allow you to have answers for your players while streamlining the storytelling process.

â€œDave,â€ you ask, furiously scribbling into you notepad, â€œwhy would I keep such a list if I only plan for their to be combat in a few major scenes?â€ Great question! (So, so naive, but I love you anyways.) And the answer is in what I call Daveâ€™s List of GM Constants: Miniatures Edition.

1: Keep childrenâ€™s blocks handy, the little wooden ones you can get by the bucket from amazon. (Consider using our affiliate link!) This will allow you to build a setting quickly and painlessly.

2: The game will always take more work than you think. Keep lists of names, locations and strange facts of the area handy. In this case, minimize the panic of having to suddenly build an area by having adjectives next to the location. (Example: Subway- Desolate, Haunted. School- Cluttered, Dark.)

3: The Hamlet Rule: Your players will eventually act like lunatics and stab someone, or a difficult situation will spiral out-of-control until no one is left but two NPCs. (Stevens and Rubia, most likely.) Someone will be caught stealing from the mayor or insist on threatening the captain of the guard. Â Get ready to clearly mark the exits for your players when something â€œpops off.â€

4: Someone will always start a fight in the tavern. Always.

So these are some of the things Iâ€™ve learned in my time having to design physical models for places my players will ruin or disregard. But what about you? Any tips or tricks for Game Masters delving into the world of miniatures? Any cheap workarounds for those gaming on a budget? Wanna hear about the time I constructed a forbidden underground temple with wooden blocks for my players, only to have my cat jump through it half way through the scene? Anybody want a slightly used cat? Let us know below.

5 comments on “Sizing Up Miniatures”