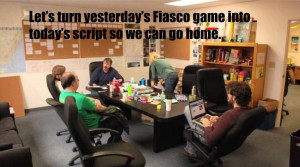 As far as pastimes go, tabletop roleplaying offers a wide variety of avenues for creativity. Character backgrounds are an exercise in story construction, actual gaming a method of improvisational acting, game mastering a means of planning, and reacting to dice rolls is an experiment in anger management and grief counseling. These are tangible benefits of skills one can develop by engaging in tabletop gaming. I believe, however, that there should be a warning to the wealth of â€œgood feelsâ€ that gaming can bring. Simply put, gaming is gaming even if it’s free bingo games no download. Donâ€™t confuse it for something else.

As I mentioned above, gaming utilizes a number of skills in order to function, many of which allow a person to create things on their own or with others, and this often leads to a triumph of storytelling amongst a group. Characters, plots and freak occurrence (mostly, but not always, dice-based) build into a shared mythology, the characters involved occupying a pantheon in the minds of the players. This construct of the imagination is a testament to the creative powers of those involved and should be heralded as such. In my experience, however, there comes a point where the thrill of creation via gaming can propel a person to want to reach beyond the table and into new mediums, bolstered by their skills with a gaming group. Donâ€™t get me wrong, thatâ€™s great! Donâ€™t be fooled by the ritual of tabletop interaction, though: Bringing your vision to the world beyond the dice is a totally different beast.

I have a friend who is both a writer and avid fan of game mastering. Creating worlds, societies, histories and intrigue and throwing players into the resulting chaos has occupied his mind since I met him in the eighth grade. He truly loves the moment where a player finds a frayed stitch in his otherwise meticulous creation and decides to pull at it, forcing him to quickly amend an entire world so that it all stays together. There is a cyclical nature to his relationship with gaming, however, and it is one Iâ€™ve seen in many people. At some point, his desire to tell a story and his desire to do so through gaming becomes incompatible. Eventually, a person wants to tell the whole story.

Iâ€™ve seen plenty of times the frustration that comes with the desire for complete control over a narrative and the confusion it brings to a gaming table. A personâ€™s vision for a story begins to sneak in and replace the â€œx factorâ€ of player decision. Sometimes new mechanics are introduced to facilitate the outcome a person wants, or player-character actions or dialogue are dictated. Slowly but surely, the interaction becomes less like a game and more like reading a script, but one that only exists in one personâ€™s head. This can lead to some (understandable) conflict at the table, and this is where a person should assess whether they have a story they want to tell through gaming, or if their vision would be best told Â in a different medium. This transition can be intimidating, but ultimately rewarding as the person in question gets to commit their attention to creating and hopefully avoid any conflicts with the people they game with.

The number of ways a person can branch beyond gaming and create something new are myriad. For instance, Billy is wrapping up his Choose Your Own Adventure on Google+ today, featuring the dark spandex-clad world of Rotted Capes. The trick is to recognize two things: When it is time to push an idea into a new form of creativity, and (more importantly) not every creation has to be Citizen Kane. Short stories, a few panels of comic or even a (ahem) short poston a blog can allow you to stretch your creativity the way you truly want to.

So what about you? Have you ever found yourself brimming with ideas that could not be contained through gaming? Have you or someone you game with branched out into other mediums to satisfy the need to bring a story to life? Leave your comments below!

2 comments on “The Creative Gamer’s Dilemma: When Tabletop Isn’t Enough”