The Rules of Found Footage Horror 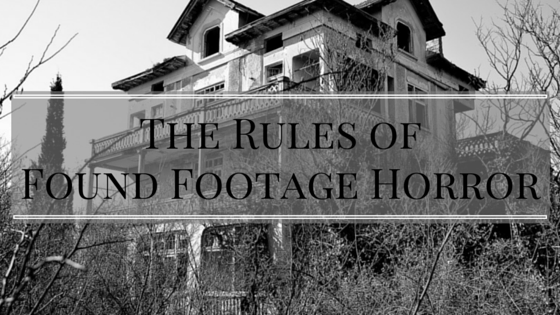 When it comes to film, thereâ€™s nothing I like more than horror, and sometimes itâ€™s the trappings and tropes of the genre that entertain me the most. Anyone lucky enough to watch a scary movie with me will know Iâ€™m inclined to raise my arms and cheer whenever, say, someone trips and falls while being chased or decides to go check out that weird noise in the basement alone (or even at all). Nothing makes me clap my hands and laugh like when a soon-to-be victim has managed to find the only malfunctioning flashlight in the entire building.

The seat of my power, though, the place where I reign supreme is the niche of found footage horror films. I can hear some of you sneer at the mention of such a maligned genre, but bear with me. Also, youâ€™re wrong and found footage is awesome. I estimate the number of movies Iâ€™ve consumed from this genre to be somewhere in the low thirties, so believe me when I say Iâ€™m always willing to watch something in this brand of cinema.

It was during my recent viewing of Final Prayer (holy shit that ending) that a thought popped into my mind: If I wanted to make a RPG in the style of this genre, what would be required to make it accurate? Well, after jotting down some notes on the topic Iâ€™ve narrowed it down to a few crucial elements that will allow you (yes YOU! The person who obviously totally loves this as much as me!) to turn any game into a shaky-cam cinematic masterpiece. (Though I would recommend the fantastic Final Girl, the villainously vibrant Fiasco, or the exquisite End of The World,Â as they best lend themselves to this genre.)

I call the opening of every found footage horror film simply â€œWhereâ€™d You Get That Camera?â€ because itâ€™s a must for the opening scene of every movie in the genre. This follows the pattern of other horror films by establishing the basics: Names, location, the totally stupid thing you and your friends are about to do, etc. Most importantly, though, youâ€™ll explain why you (regardless of the peril you all are in) will NEVER turn off that goddamn camera. Ever. You will sooner throw your first-born into the fires of Hell before you relinquish the right to record every stupid last moment of your stupid life. No reason is too flimsy, no peril too severe that will get you to stop filming.

Make sure you establish names and basic personalities (this will be important in the next step) as well as casually mention any skills or knowledge that may seem useful but will really be the reason you go so far beyond screwed you couldnâ€™t catch a bus back to screwed. With this done, congratulations! Youâ€™ve entered into a death pact with the rest of the characters, so enjoy your ride to hell!

A wonderful trope of found footage (and one that I truly appreciate) is that everyone in the film who will die is a goddamn monster themselves. The reason you got the names, locations and useful skills out of the way in the first step is to clear the way for the good stuff: Why no one should be sad when youâ€™re gone. This can be extremely cathartic in a roleplaying game, since you get to dust off those qualities that youâ€™ve always wanted to incorporate into a character but havenâ€™t as of yet because itâ€™d be extremely annoying and may lead to your friends to feeling a little uncomfortable with how easily you slid into the role of â€œcomplete shitbag.â€ You may also add any redeeming qualities if you want (in whatâ€™s called a â€œSave The Catâ€ moment) but they should be laughably miniscule in the light of your characterâ€™s shortcomings.

One important thing: This rule does NOT give you carte blanch to make other players uncomfortable. Remember: Youâ€™re playing someone awful, not actually being awful.

Step 3: Retreat Is Not An Option

…Until it is, and by then itâ€™s too late. A crucial step for any horror film is ignoring any and all chances to remove yourself from the situation until itâ€™s clear that youâ€™re in serious mortal peril. The great thing about found footage, though, is that the conceit of the film is already so ridiculous that itâ€™s totally fine if you wait until the maw of Hell is yawning before you to say to the camera â€œOkay I think we should leave,â€ so donâ€™t forget to dive right in with an abandon like your character has never even HEARD of the supernatural and canâ€™t be harmed by anything! Youâ€™ll be totally fine and donâ€™t forget to be awful.

(*Spoiler Alert for Paranormal Activity 3* This film has one of the only instances where this rule was broken in beautiful fashion, as the friend of the protagonist who witnessed the supernatural threat first-hand got the fuck out of there. He didnâ€™t come back at the last minute to save anyone or let our hero convince him to stick around. He was smart. You are not playing someone like him)

A criticism of the found footage genre is that as the tension mounts, the actors increasingly yell their lines, leading to scenes where words are shrieked until the whole mess sounds like a nest of baby birds waiting to be fed. Wait until the moment presents itself (ideally the scene where a life-or-death decision needs to be made) and proceed to cry out like a complete lunatic. This is a good time to do a â€œbring aroundâ€ from Step 1, where you revive any reservations you had about the situation, as if that will absolve you of the death-menagerie that you and your companions find yourselves in. (For the sake of neighbors, however, choose one scene to do this in and be done with it, because your characterâ€™s time draws nigh anyways.)

Step 5: Something for Everyone

One thing that I love about found footage horror is that it takes an interesting spin on an old trope: Someone needs to survive to tell the tale. Granted, this isnâ€™t the case in every scary movie but is constant enough to warrant recognition. Since the genre introduces a new element (the camera-as-character) this turns the rule on its ear, allowing for what we gamers call a TPK, or â€œTotal Party Killâ€ where the only one to survive is the silent observer in this whole ordeal, the camera. Iâ€™d like to address the two sides of this issue individually.

Game Masters: Enjoy killing everybody, because (if they followed the previous rules) theyâ€™re all a bunch of dicks! Their selfish, snobby, vapid existences are about to reach an end, and you get to make it happen! Remember to have the final reveal to be a twist on the original reason that they came and always give emphasis to the fact that they were wildly, horribly out of their league. Have fun with this.

Players: Enjoy dying because youâ€™re all playing a bunch of dicks! I hope youâ€™ve emphasized the wretched mannerisms of your various characters because the aim here is to show the audience that you are dying due to arrogance, greed or just plain stupidity. (Of course it could be for any other horrible aspect of well.) As the end rears is horrible visage and your character realizes that there is no way out, nowâ€™s a good time to throw in any laughably semi-redeeming quality you have been holding onto that wonâ€™t change the circumstance at all. Goodbye and good riddance!

I hope this helps in your quest to accurately play one of cinemaâ€™s greatest genres, as the new takes on the old tropes can be fun to replicate in the right setting. Fun additions to the rules can be introducing a mechanic concerning who wields the camera and the way in which the threat is often teased but not revealed. If youâ€™re a fan (or not, though I donâ€™t see why you wouldnâ€™t be) leave your comments below telling us why you do or do not totally dig this amazing cinematic phenomenon or anything else about this guide.

(Note: The collective noun for complete dicks is a â€œflagon.â€)

5 comments on “The Rules of Found Footage Horror”