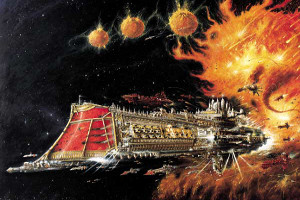 As requested, I have collected the latest information on the traitorous ship known as The Shadow Labyrinth. I wish the information were more extensive, but the current Arch-Militant of the ship has become somewhat brutal in her methods to ferret out dissent in her ranks. For this particular report, I wonâ€™t bore you with information on the main persons of interest of The Shadow Labyrinth, asÂ you have already been given extensive dossiers on the captain, his vile Xenos partners, heretek tech priests, etc. I will mainly concentrate on a brief review of the various capabilities of the ship, the various compartments, and any interesting crew that we may wish to possibly eliminate or, even better, turn towards our holy cause.

The Shadow Labyrinth is, at first glance, a Firestorm class frigate, a ship class known to be only a millennium old. Upon closer inspection however, the ship is obviously much older. Macharius family records simply state that it has been with them for over 5000 years, but nothing is known of who they gained it from or when it was built. What we can be sure of is that there is at least one bit of heretical Xenos tech on the ship. Reports of the ship using illusions/heretical tactics during combat seems to indicate this.

A ship rather large for its class, it measures 1.8 kilometers and is .3 from side to side. It Â carries approximately 25,000 heretical crew. It seems to be a extremely maneuverable ship for its size and tends to avoid combat when possible, but appears to carry a macrocannon of a standard make for combat. It also seems to carry a torpedo tube as well, which is rather uncommon for a frigate.

Before I go into detail about possibly important compartments and people, I should mention the configuration of the ship is quite bizarre. A twisting maze of corridors, hidden passages, and dead ends; it seems to mimic the twisted mind of the heretical Renaldo Macharius.

Second in command to the hated Captain is a young lieutenant by the name of Ella Karolus. Apparently rising to her rank after the previous lieutenant was set to pasture for poor leadership during the Simon situation (may the Emperor bless his soul), she has apparently been fairly effective and has an extreme urge to prove herself.

The head Astropath of the ship is a man going by the name Godwin. An unremarkable little man, he can possibly be led to our cause as he seems to chafe at the Xenos presence aboard the ship.

No more proof of the Captain’s heresy is needed then in the form of a heathen Pskyer by the name of Quincy. Unsanctioned, the Psyker is still kept alive, probably to use his heretical abilities, or as a sacrifice for a debauched Xenos ritual.

There are rumors that the Captain also has a Seneschal with an elite group that serve as spies aboard the ship, as well as missions in our own worlds. At the current moment, no hard evidence exists to prove this is a reality.

Although the heretek Quantus is officially in charge of the tech priest rituals on the ship, there is rumor that a few of the tech priests on board do not appreciate the bizarre mannerisms of the heretek. These mainly consist of the old guard who had previously served with Renaldo Macharius’ father. The head of this group is called Engle Rule. A few of the newer tech priests seem to be on the edge.

The ultimate proof of Macharius’ corruption, The Xenos Habitat Â is an area of the ship built for trade with the vile Xenos. All operations of said environment are handled by a person by the name of Lenna Mozo. An apparently gifted individual from some out of the way world, she seems to be Â capable of using this technology without the holy knowledge of the Omnissiah. She has become an expert on alien environments and bioengineering. No doubt performing heretical experiments for the Captain.

The previous head of surgery, Feddic, has been captured by the Dark Eldar during a raid. No information on a possible replacement is currently available.

Temple shrine of the God Emperor:

As you may know, Renaldo Macharius’ father was a devout man. How he spawned such a heathen for a son will always be a mystery. Either way, his father had, during his time as captain, Â installed a massive temple to the Emperor. Capable of holding a thousand worshipers at a time, it was his pride and joy. Sadly, Father Kaine has apparently decided such a vast room is best used for debate and philosophy rather than the rage of the Emperor.

Although a frigate can’t usually equip a hanger, we can only assume The Shadow Labyrinth’s Â ancient design allows for a much more efficient bay that we are no longer able to reproduce. The number of fighters is still relatively low but it seems to house a fairly skilled crew headed by a Flight Marshal by the name Dorian Finn.

Housing the military personal of The Shadow Labyrinth, Natasevyaâ€™s second in command is a soldier by the name of Megara. The troops are very well disciplined, unusual for chaotic rabble.

This is sadly the most up-to-date information available at this time. At the current moment, we have a few possible souls who have not been detected. Although the Arch-Militant’sÂ tactics are brutal, they tend to clear out the fish, leaving the sharks time to lay low. One day, these sharks will strike, and this foolish captain will know the price of heresy. His body will be torn in two, his sailors sucked into space, and his ship tossed into the sun.

May the Emperor’s peace be with you.

5 comments on “The Shadow Labyrinth”