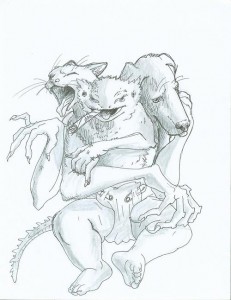 I hate the dog the most. Which should be surprising, considering the cat is a arrogantÂ piece of fur. Nonetheless, the cat tends to keep its own counsel so I can ignore it on most occasions. The dog though, the dog whines. The insufferable animal seems to whine for the most idiotic reasons.

Instead I am stuck as I am. A two foot tall undead abomination composed of three heads, four arms of varying usefulness, and a body that I can only assume was constructed of animal parts, human remains, and the doctor’s particular form of madness.

The only other contacts outside of my two mental tenants are the doctor and the Irish dhampir. The doctor doesn’t realize I am intelligent and runs experiments on my body. I generally donâ€™t feel any pain but I attempt to give satisfying screams. I believe I quickly turned from an actual experiment to a strange form of stress relief. I should find it odd, but I find it amusing to scream out the most disturbing words possible when company is over. Their reactions are always memorable.

The dhampir on the other hand knows fully of my ability to speak. He found out in the most direct way possible: I told him. What makes that so strange is I donâ€™t know why I did it. Something happened. Some mental tug that seemed to push me to speak. To tell him truths that I didn’t know were true till I stated them. It was, admittedly, a bit disconcerting.

Still, it does seem to bring about a certain sense of purpose. Where previously I thought I was simply an abomination against all that is holy, I am now something else. The conduit of some greater power perhaps? An avatar of some god of death? Or maybe I am simply insane. Although, how can you attribute madness to a creature who is obviously not human and quite obviously dead? Â A question for the psychologists, I guess.

Ah, the dog is whining again. It…it wants to be let out…. The creature attached to two other heads on an undead body wants to be let out. â€œWE HAVE NO BOWEL MOVEMENTS!â€ I scream into its mind. â€œWE ARE DEAD DEAD DEAD!â€ A wave of rage pours from my mind into his, hopefully breaking the dam of stubbornness the dog has built around its tiny little brain.

The dog stares blankly, turns its head slightly, and urinates on the table.