Treatise on the Night Raven Threat 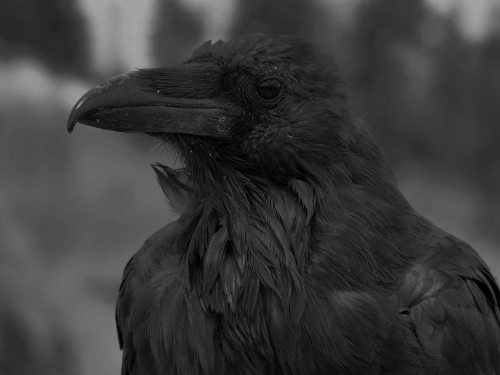 Using both Human and Raven (specifically Corvus Corax) DNA, the Prussian Science Academy created the Night Raven, a thin humanoid creature standing between 6 feet to 7 feet tall and covered in black greasy feathers. It has three fingered claws and upon its face is a dark yellow beak powerful enough to crack bone. The Night Raven is significantly weaker than their British counterpart, the Thrope, although slightly faster. Which is incidental, since their purpose is not combat, but infiltration.

The Night Raven, either through stalking its prey or an ambush, grabs a potential target and begins the process of transformation, a method that is less like the killing methods of a predator and more that of a ritual murderer. It jabs its beak into the victimâ€™s eye and with itâ€™s powerful jaws, splits the skull. It then consumes the brain of the victim. Its meal complete, it begins to transform into the victim, repeating the words â€œsee, think,â€ in a combination of high pitched words and squawks. Where they learned this phrase is unknown, but it is assumed to signify taking the victimâ€™s sight with its beak and consuming the victimâ€™s brain. What is more curious is that it’s understood by those around the creature in their native language. Â Even those Night Ravens raised without contact with other ravens repeat the same words without fail.

A Night Raven is not truly sentient, not even in its borrowed human form. It relies on instinct, its primary focus being the urge to mate, sleep, and protect its territory. When it transforms, it uses the memories of its host to create the impression of sentience, using rote skills, common phrases and learned behavior to mimic humanity for as long as necessary. It is as though they are looking for the right answer for a question from a encyclopedia of past phrases grabbed from the victimâ€™s memories. Prolonged exposure to the Night Raven in its human guise will eventually result in those intimately familiar with the victim realizing something is amiss with their companion.

The process of training these creatures was just beginning before the event known as the Koinberg incident. Although the initial vector of infiltration is unknown, at some point, a number of Night Ravens took over a large portion of the staff and released their companions into the wastes over a period of a few days. By the time the escape was discovered, it was too late. Most of the captive Night Ravens were released, the rest taking many live before they were put down.

Now, the Night Ravens have become a threat to the Prussian Empire. They have already infiltrated many of our smaller communities in the empire. Within this document are guides, weapon specifications, and psychological tests to use against the Night Raven threat. You are the shield against a terror that may do what no other force has ever done. Destroy the greatest empire in existence. Good luck, Agent. Â

5 comments on “Treatise on the Night Raven Threat”