5 Weird Weather Events to Use In Your Game 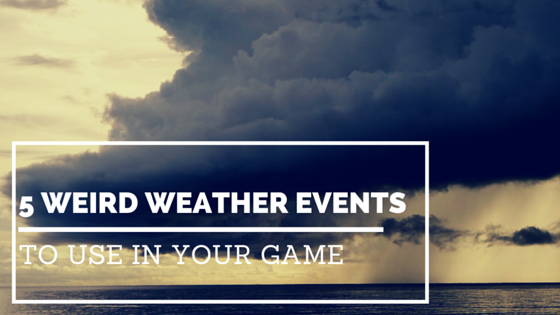 2015 brought the world some weird weather, and if the record-breaking blizzard of January is any indication, 2016 is going to be more of the same. So in honor of Atomic Robo returning to the podcast this week, and with it everyone’s favorite meteorological intern, here are five terrifying-but-totally-real weather events that can be used to inspire your setting, a character background, or even a uniquely-deadly superpower.

1. The Year Without a Summer

In 1815, a volcano in the Philippines had a massive eruption – large enough to influence the climate on the other side of the world. The summer of 1816 was hardly a summer at all. Parts of the northeastern United States saw frost well into August. Cool rainy weather in Europe caused a devastating typhus outbreak, exacerbating years of poor crop growth. Closer to the origin, the monsoon seasons in China and India were disrupted by the volcanic dust, causing massive flooding problems.

During this summer, a young Mary Shelley was vacationing with friends – including Lord Byron – in the Swiss Alps. Stuck inside, they challenged each other to see who could write the scariest story. The rest is literary history.

Keep the Year Without a Summer in mind when you want to highlight the local consequences of world-wide events. It could also inspire a character background, of a former subsistence farmer forced to leave her ancestral home to find a life elsewhere, or could force your characters to stay inside, like Mary Shelley, Â for a much more intimate story (horrific murderous monsters optional).

A generally harmless weather phenomena associated with areas of strong electrical activity, St. Elmoâ€™s Fire is when plasma is seen to dance along tall points, such as tree branches or the masts of ships (St. Elmo is the patron saint of sailors).

Use St. Elmo’s Fire as an omen (for good or ill – you know how superstitious sailors can be), or some kind of magical surveillance device that is likely to be overlooked. And of course it can be used to leave your PCs a clue about an incoming storm – or one that they just missed. 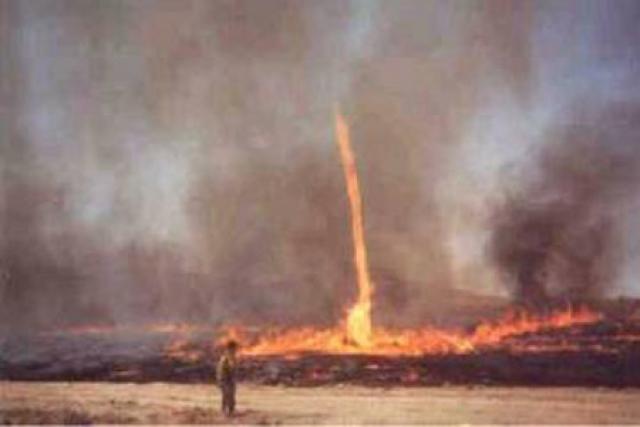 If you listened to End of the World: Gaeaâ€™s Revenge, you probably remember the terrifying water spouts that swirled up the
East River, separating the party. Water spouts are tornados that form on water – but did you know they can form near forest fires as well? A fire whirl is when a tornado sucks up burning debris, and becomes a whirling dervish of fire and destruction.

Use fire whirlsÂ as either natural weather phenomena to freak out your PCs, or the logical conclusion of what happens when weather and fire controllers face off in a superhero game.

Itâ€™s raining cats and dogs out there! This is more than just a colloquial phrase – there really have been reports of animals raining down from the sky – though usually itâ€™s fish or frogs, not household pets (though at least one instance each of jellyfish and spiders have been reported).Â

If you want to send the message fast that something weird is going on, have it rain animals. If you want your group to know it’sÂ really bad, don’t have the sky rain down whole animals – frozen, shredded body parts have been reported too. Enjoy those nightmares. You’re welcome.

While the name inspires 12 year olds to giggle, a haboob is a terrifying weather phenomena that you can’t outrun – you can only find a place to hunker down and hope it passes quickly. The Southwest US had several of these a few years ago, giving us these awesome videos:

And in SeptemberÂ 2015, the Middle East sawÂ a massive storm that sent people to the hospital with breathing problems in 7 countries and lasted for days. It was visible from space! Haboobs are storms you can literally see coming from miles away, but due to their size you can rarely escape.

Use the haboob in a dry, arid setting to trap your characters (the opposite of the Year Without a Summer scenario, but same outcome), or as an awesome show of power from someone who can control the wind.