Why I love The Strange 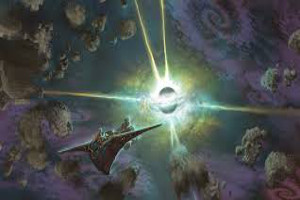 This past weekend, I ran a session with Daniel and David for the podcast in the world of The Strange. David was a sentient crow looking to strike it big in his town tree of Crow Hollow, and Daniel was his human partner just trying to make a quick buck. While running the game, I discovered something I hadn’t had a chance to play since I ran Planescape: a game of subjective reality.

The Strange uses the cypher system, originally developed for Numenera, a game I loved. So much so, that I was a little worried about this game. As Daniel put it, there was a worry that it would be just Numenera with a different setting. Still, I decided to back the game on Kickstarter and hope Bruce Cordell and Monte Cook can deliver on their promise. Thankfully, they did.

So how is the game different? Well setting wise, itâ€™s our modern day but the entire universe has a sort of dark energy under-layer called The Strange. It’s a place where fictional worlds, called recursions, are created by the imagination and can come to life. These become worlds of their own with its own laws of physics that fit into their setting. It could be a world where magic is real or one where cyberpunk tech can do the impossible. The main characters, Recursors, can travel between these worlds while their items, and sometimes even their bodies, can change to fit into the physics of that world.

The mechanics themselves are, of course, similar to Numenera, but changed enough that it makes sense in the context of this setting. For example, Foci, your extra power boost that helped define your character in Numenera, are now interchangeable between worlds. Because the rules of each reality are different, certain abilities simply wonâ€™t work when you jump, Sliders-style, to another recursion. You might have to leave a cyberpunk warzone as a “fusion of man and machine” and be forced to change into “good with sticks and rocks” in a world of cavemen. Still, it doesn’t feel slapped on. It makes sense and helps define what a world is about.

The mechanics and the setting also helped me realize that The Strange was giving me something that Numenera had not yet provided. Now don’t get me wrong, I love Numenera. The few sessions I played were a blast and it had some of the bizarre elements I love in a game. I hope to actually play more sessions of it in the future. In the end though, Numenera feels like a traditional fantasy game. You are versions of wizards, thieves, and warriors, and you fight monsters in a far future techno-fantasy setting. The Strange itself has a very different feel to it. A feeling I didn’t realize until one of my players made a person realize he might not be real.

Numenera gave me bizarre creatures and worlds, but The Strange provides me with the philosophical weirdness I’ve been craving. When a world is created, either by “fictional leakage” or some organization wishing to create it, it becomes populated by people, creatures, sentient clouds, that fit what ever setting it is a part of. Once that happens, they are independent of the dreamer. They become as real as you or I, which brings with it all sorts of headache-inducing questions. Most of these people follow preset lives associated with their roles when they are created. A baker will always be a baker in a certain city. But some percentage will gain “The Spark” and realize they can be more. They may not realize they are part of a created world, but they will want to change and grow. And as more people of this once fictional world become self aware, the recursion they are on grows as well, as if it becomes more solid the more people see it exists.

If you want to get weirder, there are alien species with their own fictional worlds to see as well. What would an alien’s version of the Wizard of Oz, Wonderland, or Lovecraft look like? When you travel to those worlds, will you take on alien bodies and will your minds be able to handle the transition? Will you come out a different person because of it? Even stranger are the creatures who call The Strange home, who laugh at the idea of physics so hard they might give Cthulhu a headache.

All that said, it should be obvious I would recommend this game, and you can check out the first session later this month here on Fandible. If your were a fan of the old Planescape game but Numenera isn’t doing it, try out The Strange. It might be the spiritual successor you were hoping for.