Saturday marked the official start of summer here in the Northern Hemisphere (sorry, Australian listeners). And Fandible spent it 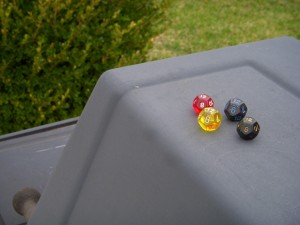 just as we do every Saturday: role playing. Because we are nerds who shun the day star and prefer to develop a pasty palor rather than worshipping the sun. (In our defense, at least two of us claim Irish heritage and the sun really is our nemesis.) But just because we arenâ€™t taking beach days doesnâ€™t mean that we donâ€™t acknowledge that summer brings with it a decided change in lifestyle. And not just increased electricity costs from the AC. Some games just beg to be played in the summer, whether itâ€™s their genre, style, or physical form. Here is a (totally unscientific) list of the five best role playing games to play in the summer.

Why?:Â Because I am contractually obligated to mention this game in every Fandiblog post.

Sea Witch may or may not be included.

But aside from that, there are few games that do a better job of imitating the summer action blockbuster genre than Hollow Earth. Explosions, dinosaurs, mad science, dinosaurs, nazis, explosions, and did I mention dinosaurs? Just ignore that pesky socialÂ commentary the GM keeps trying to insert.

While October is when horror movies kick into gear, at Fandible we love Final Girl at any time of the year when we want a game we can pick up fast and run. With all of the rules and potential plot hooks contained in a 28 page booklet, and only a deck of playing cards and some index cards for materials, it doesnâ€™t get much easier than this. Shorter prep = more time to enjoy the sun (if thatâ€™s your kind of thing).

Why?:Â Go as crazy silly as you want in another rules-light game.

You can play pretty much anything using various freely-available Fiasco playsets. Superhero blockbuster? Check. Historical drama? Check. Backstage farce? Check. Itâ€™s quick to pick up, and plays without a GM so the story can go in all kinds of crazy directions. And then the â€œtiltâ€ happens and everything is guaranteed to go to hell in a handbasket.

Why?:Â Because all of your supernatural teen angst drama shows are on summer break. And youâ€™ve finished your annual re-watch of Buffy already.

Good. You wonâ€™t mind looking at my Castiel/EVERYONE tumblr then

Summer is steamy. Monsterhearts with its infamous sex move is also steamy. Match made in heaven! One of the early riders on the Apocalypse World bandwagon, Monsterhearts has most of the rules the players need contained on one 8.5×11 sheet of paper. Character customization takes just a few minutes, and then youâ€™re off. This can get as dark and angsty or light and campy as you want, just make sure everyoneâ€™s on the same page when it comes to the deployment of those sex moves.

Why?:Â Because youâ€™re not in school but miss lugging around a text book.

In many ways, Warhammer 40K is the oppositeÂ of everything else in this list. It is dark (corpse crackers, anyone?), it is rules-intense (I wasnâ€™t kidding with the text book reference), itâ€™s freaking insane. And yet, if youâ€™re the type of person who doesnâ€™t have a lot else going on during the summer, it might be the perfect time to delve into Warhammer 40K. No tests to study for, no extracurricular schedules to plan, just days filled with nothing but death and destruction.

But enough from me! What are you playing this summer?