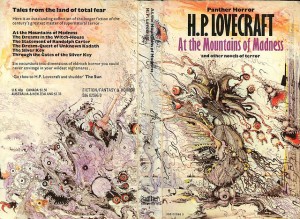 A friend of mine once said to me â€œIâ€™m thinking of running a Cthulhu game but Iâ€™ve never read any H.P. Lovecraft. Do you think thatâ€™s important?â€ The look on my face must have given him some sort of answer, because he dropped the topic with a simple â€œOh.â€

The question, however, is a valid one. When the work of one or more authors becomes pervasive in gaming and saturates the community to the point theyÂ make multiple games, is it crucial to have read the original material that the games are based on? Many cyberpunk players and storytellers alike may have never read William Gibson or Neal Stephenson, and the prominence of creatures such as vampires in modern literature may lead to a game run by a person who has never read any of the original lore. The matter is further complicated by an authorâ€™s work being adapted into a film or television show (which I will address in minute). With these factors in mind it is absolutely possible for a game to be run by someone who has never glanced at the original material the game is based on. I would argue, however, that this limits the potential for the game and also the fun that can be had within.

To be clear, I have not read everything ever written by the authors that have inspired my favorite games, nor do I advocate for such an undertaking. Some authorsâ€™ works are so voluminous that it would be absurd to insist it become required reading. Familiarity with an author can open doors for wonderful narratives and role-playing while allowing you to see the directions that certain games have taken source material. Barricading yourself within a fortress of everything the author has ever produced in order to glean new insight into the setting may sound fun for some but is, however, entirely unnecessary.

The issue of film adaptations of source material is an interesting dilemma in that it may offer new insight into an authorâ€™s work or deviate from it in critical ways. Watching Bladerunner, for instance, is wonderful for general sci-fi material that offers beautiful visuals and intriguing plot hooks, but is not an accurate portrayal of Do Androids Dream of Electric Sheep?, the Philip K. Dick novel on which it is based. Conversely, watching The Maltese Falcon with Humphrey Bogart and Mary Astor will give you a pretty accurate idea of the book by Dashiel Hammett, with many lines in the film directly lifted from the novel. The problem with films as a source material rather than a novel, however, is that either way you will be left with the fact that you need to read the novel in order to find out whether or not the film is true to the text or Hollywood fluff.

Allow me to describe an experience I had that bears relevance to this topic. I made a character for a Cyberpunk 2020 game and was excited to play a hacker. With a sturdy grasp on cyberpunk as a setting I casually asked the group â€œHow do you guys do computer stuff in this game? Any house rules?â€ The storyteller responded â€œWe run it like The Matrix.â€

I was elated to hear this. I had just re-read Neuromancer and played enough Shadowrun to know how the Matrix worked. I built a wildly talented technological teenager who could plug his mind into computers and create code on the fly. He could read seven languages, knew all the best Matrix hangouts and barely saw the light of day. Thinking that he wasnâ€™t reflecting the dystopian image of a down-and-out cybercriminal I also made him addicted to advertisements for a certain brand of soda (not the soda, just the ads). Twenty minutes into the game I had my first encounter with a rival hacker in the virtual world.

â€œRoll your martial arts,â€ said the storyteller. I was confused, shocked, then extremely frustrated. It turns out that when he said â€œThe Matrix,â€ I thought he meant the William Gibson kind, but really he meant the Keanu Reeves kind. Suffice it to say my characterâ€™s expansive knowledge of Chinese Military Data Encryption did little to protect me from my opponentâ€™s Deadly Eagle Palm Strike.

Letâ€™s go back to the issue of H.P. Lovecraft. While many games have been created based on his stories, more than a few of them deviate somewhat from the original theme. (The Laundry, based on The Laundry Files novels by Charles Stross, is a good example. You can listen to our experiences with it here.) Between the board games, card games, video games, films, and television shows based on Lovecraft, it is more than possible to have a feel for his work without actually encountering it directly. To really appreciate it, however, and the many media that it has spawned, one should absolutely read The Call of Cthulhu, if for nothing else than to see the unique direction that some games have taken Lovecraftâ€™s work.

With familiarity comes the ability to expand and improvise while protecting the core of the material, should that be important to you. This becomes particularly crucialÂ when you are running a game based on works that your players are fans of. While you should avoid the dangerous one-upmanship that can come with proving you know the source material (which can derail a game and cause real life friction) it helps to be on level ground with your players concerning the material as well as allowing you to cater the game to your players within the setting.

So if you are considering running a game based on certain works, it can only strengthen your game to peruse a book or watch a classic film that a game draws itâ€™s setting from. I promise that your new appreciation for the material will lead to more robust stories and greater enjoyment overall, as well as the quiet admiration of your players.

Â The admiration may be extremely quiet, but itâ€™s there all the same.