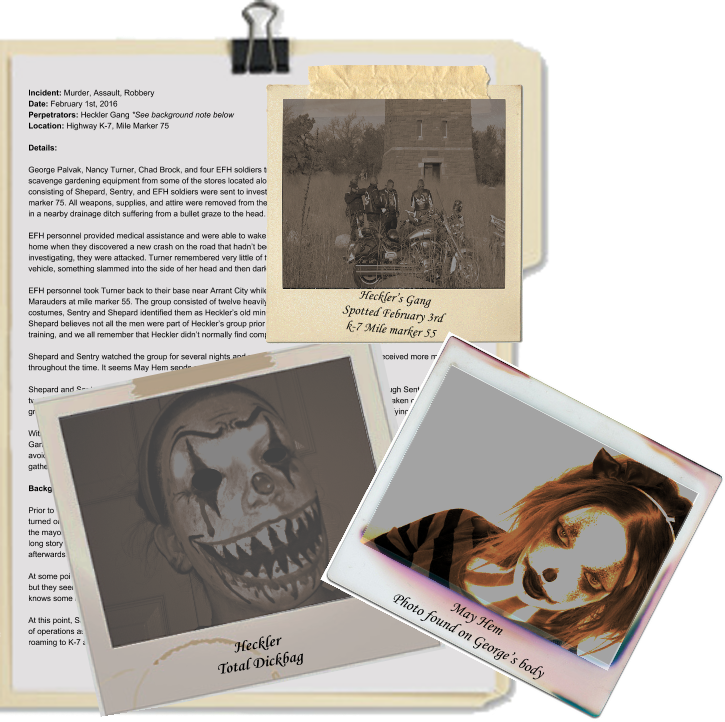 Case File:Â T-102 (T is for Torchlight. 102 is for how many of these I’ve had to write. Why did paper work survive the Apocalypse?)

George Palvak, Nancy Turner, Chad Brock, and four EFH soldiers traveled away from Arrant City on K-7. They were to scavenge gardening equipment from some of the stores located along the highway exits. When they didnâ€™t return, a team consisting of Shepard, Sentry, and EFH soldiers were sent to investigate. Palvak and Brockâ€™s bodies were found at mile marker 75. All weapons, supplies, and attire were removed from the victims before being executed. Turner was found injured in a nearby drainage ditch suffering from a bullet graze to the head.

EFH personnel provided medical assistance and were able to wake Turner. She reported that the group were on their way home when they discovered a new crash on the road that hadnâ€™t been there when they first drove down the highway. Upon investigating, they were attacked. Turner remembered very little of the attack, only that when she turned to duck behind her vehicle, something slammed into the side of her head and then darkness.

EFH personnel took Turner back to their base near Arrant City while Shepard and Sentry investigated. They located the Marauders at mile marker 55. The group consisted of twelve heavily armed men and women. Even without their ridiculous costumes, Sentry and Shepard identified them as Hecklerâ€™s old minions due to tattoos and the presence of May Hem. Shepard believes not all the men were part of Hecklerâ€™s group prior to Z-mageddon because they show signs of military training, and we all remember that Heckler didnâ€™t normally find competent recruits.

Shepard and Sentry watched the group for several nights and reported that the group continuously received more men throughout the time. It seems May Hem sends out scavenging groups as well.

Shepard and Sentry reports that children are part of the Marauders. Shepard counts eight children though Sentry believes that two babies are kept in the RV. By their observations, these children are not neglected and seem to be taken care of by the group. May Hem apparently does magic tricks for them at night which I might add is probably more terrifying than fun.

With the presence of children and the unknown number of men within Hecklerâ€™s Gang (maybe we should call it May Hemâ€™s Gang, Wanda?), they returned to Haven. Wanda and Andrew Westin decided for the time being that Hecklerâ€™s Gang is to be avoided. All scavenging operations along K-7 and U.S. Route 169 are to be cancelled until an appropriate response can be gathered to deal with the situations.

Prior to the complete zombification of the world, Heckler was a mild annoyance. Heckler was a minor psionic who somehow turned onlookersâ€™ terror into feelings of amusement. I actually fought the guy once when he tried to host a public execution of the mayor during a local high school football game. When I arrived, the entire stadium was laughing hysterically. Anyways, long story short was that I saved the mayor, stopped Heckler, and I ended up banging Alicia Havinstache from KSDR afterwards.

At some point after Z-mageddon, Heckler went MIA. I would have assumed his minions would have scattered or been killed, but they seem to have rallied under one of Hecklerâ€™s sergeants, May Hem. May Hem does not have any special abilities. She knows some fancy kung fu and has a few â€˜hilariousâ€™ party favors.

At this point, Sentry and Shepard have estimated that the Heckler Gang is twenty strong. They do not appear to have a base of operations as they roam the highways like modern day marauders. However, the group seems content with keeping their roaming to K-7 and U.S. Route 169.

PS: Wanda, when can I go back into the field again? I promise I won’t try to kill myself. Let God strike me dead if I’m lying.Â

PSS: Damn. Was thinking that would work. Touche, God.Â

We return to the world of Rotted Capes under a new name, Arrant Powers, on March 11th! Stay tuned…