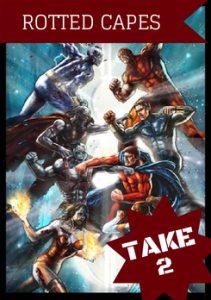 As you all might have seen a few weeks ago, I had to eat some crow (by the way, Iâ€™m in love with that phrase now. Expect it another three times in this article). After we played the game Rotted Capes, we gave it a thorough review where we talked about our thoughts on the game. And as usual, we were are naturally-amusing Fandible selves.

In our review, we complimented the setting of the book – and indeed it deserved the praise it received. We loved how the narrative melded together perfectly with the concept that you werenâ€™t playing the bad ass warrior, but the sidekick who was now the best line of defense. For those that have listened to TheÂ Shambling, you know that sort of character is my jam!

So… we were very nice about the setting…

And then we sort of said the system stunk, the price wasnâ€™t reasonable, and then topped it off with me mocking a few of the nerdy pictures. Per usual, I was being a class act. We absolutely enjoyed the idea of the game, but these flaws made it so we were going to start looking for a new system to use. That is, until both creators of Rotted Capes at Paradigm Concepts contacted us. One simply wrote us a note thanking us for playing the game. He did explain some of the confusion we had, but overall, the letter was just him thanking us for taking the time to try out the game. Then another creator offered to run the game at Origins for us. Both were extremely professional, and, I say this not in a mocking tone – Iâ€™m serious! – both showed to be role models that those in the industry should look to.

So, we met the creators, played the game, and now, Iâ€™m ready to give a new review to Rotted Capes.

This review will be addressing the issues we brought up in our original review of Rotted Capes. Some of the complaints we had were major (not enjoying the system) while some of them were petty (mocking the glasses on the pictures), but Iâ€™ll do my best to address everything we said about the game.

The number one complaint we had about the game was the system. We felt it was overly cumbersome. I still feel that Rotted Capesâ€™ system isnâ€™t great for Fandible. As most of you know, we are generally a rules light sort of group, and generally used to a straight-forward combat style: establish initiative order and maintain that order until the bad guys succumb to our might The system in Rotted Capes is a touch more complicated, but it Â works. After a few rounds of seeing it in action, it turns into second nature. At the core of the mechanic is the clock, and each action you take advances the clock a number of â€œticks.â€ From your initial initiative roll, keep adding up your personal ticks and when the GM counts up to your number, jump in! When you have an experienced player show you the system, it is easy to pick up on. At Origins, Angela and I understood the system within an hour or so. So, the system works.

However, I think the book sometimes gets confusing.

As you might have heard, Angela and I work in the publishing business. Angela herself works daily on titles that are going through the review process. She (and to a lesser degree, I) have an eye for editing. So, at the end of the day, we think Rotted Capes could have used another pass with the editorâ€™s pen. One for simply catching grammar mistakes and the other for rephrasing some things. In the book, some parts seemed complicated, while others seemed to come too early on in the book. It isnâ€™t that the book is not a fun read, it is. However, I think people who are coming in fresh to the Arcanis system will have some issue starting out.

The second thing about the system we brought up in our original review was the lack of rules for magic-based characters. Throughout the book, I noted several instances of â€˜magicâ€™ being used in the narrative. So, when I realized you couldnâ€™t make a magic user, I was a bit confused until I spoke with the creator. He told me that it was simply done due to space, and that the magic rules (and other character concepts) were best reserved for later on down the road. And you know what? Iâ€™ll accept that. Maybe I would have opted for getting rid of the mention of magic in the original book, but you know how many roleplaying books Iâ€™ve written? Nadda. So maybe I should shut my mouth, right?

Now weâ€™re getting to the petty things: pictures and price. It was explained to me that the pictures of heroes and Super Zâ€™s in the back were of people who donated to the kickstarter. And while I think the artist could have replaced a few glasses with masks or goggles, Iâ€™m going to stop being a butthead about it. The majority of the artwork is absolutely beautiful, and it has a wonderful look to it that blends the zombie and super hero themes together. As for the price of the book, I still think asking twenty dollars for a PDF is high. Itâ€™s just a personal thing with me. And I think asking twenty dollars instead of fifteen might hurt Rotted Capes. However, at the end of the day, if you were to ask me if I got twenty dollars of enjoyment out of Rotted Capes, I would say I did.

Rotted Capes has some issues to it. However, I would say a lot of games have issue to it. Warhammer 40Kâ€™sÂ core mechanic (roll a percentile) is easy enough, but combat can be incredibly complicated. Not only that, but itâ€™s stupidly depressing at points. Fate is an amazing system that allows you to create a plethora of characters but the system can feel it gets off the rails sometimes. Rotted Capes can feel complicated in the beginning, yes, but the gameâ€™s narrative is a huge selling point. Itâ€™s well thought out and unique and tailor made for those who enjoy the grittiness of â€˜weakenedâ€™ heroes such as The Punisher.

All in all, Fandible will be continuing to work with Rotted Capes. Iâ€™m even thinking about branching out to make some Youtube clips for â€˜how to playâ€™ because… well, I like superheroes and I like zombies. I think this game is worth the time weâ€™re going to spend on it, and I think that our audience will enjoy the game play it brings to their own table.

Check outÂ Rotted Capes for yourself – the pdf is now available through Drive Thru RPG.