The Avengers: Age of Ultron is coming out this Friday for us Americans. Yes, I know, the people outside the great US of A got to experience the movie a week in advance; I hope you all burn in hell for that. However, Iâ€™m not bitter. While our European brethren (many who have lost wars to us) have been watching this film, Iâ€™ve been gorging on all other things super heroic! Iâ€™ve watched Daredevil on Netflix, experienced the joys of kicking ass in Champions Online, and I’ve been able to read a ton of superhero RPGs! I’ve gone from Mutants and Masterminds all the way to some newer ideas on superheroic gaming, and let me just say – there are a lot of great games out there. Below you’ll findÂ FOUR superhero RPGs that break the mold from the typical hero setting and do something completely different.

Yes, I know. Youâ€™ve probably heard me talk about Rotted Capes several times. And you’ve probably heard our games as well. However, it would be a crime to not bring it up as it takesÂ the superhero genre and flips it on its head.

In the setting of Rotted Capes, the world lost the war with the undead. Not only that, but the heroes that once protected the world from villainy have been transformed into undead monsters while still able toÂ use their powers, think, and hunt the rest of humanity. As a B-Lister, youâ€™re one of the few lesser heroes not to be eaten by the hordes of the undead. Now the fate of humanity is up to you.

What I love about Rotted Capes is that it’s really a survival story ready to be played. You can play it â€˜superheroic-yâ€™, sure, but the beauty of the game is having these once virtuous symbols become something darker and human. You canâ€™t be the shining beacon of hope when youâ€™re starving and you realize that there areÂ only enough beans in that can to feed one of you. In Rotted Capes, you arenâ€™t trying to be super; youâ€™re trying to remain human.

Do you like history? Do you like superheroes? Whatâ€™re your thoughts about World War II? Well, if youâ€™re a fan of the era, then do I got a setting for you. Godlike by Dennis Detwiller and Greg StolzeÂ explores the idea of superheroes during this time. While itâ€™s a little sparse on the narrative (sad face!), it does give you a solid set of rules in order to get you ready to take on some Nazi Ubermensch.

While I havenâ€™t gotten too deep into the rules, it’s the same system as Wild Talents, the modern-day sequel to Godlike. It also has some nice artwork – which was what caught my eye when Daniel initially showed it to us. With some really solid writing and a familiar rule set, Iâ€™m sure anyone who loves both heroes and war stories will find this a refreshing game to sit down with.

When I was at a con, I happened upon Mutant City Blues quite on accident. I had told myself I wasn’t going to buy any more books, but once I read the back and the introductory story, I knew they had my money.

Mutant City Blues by Pelgrane Press is a game that takes a superhero show and a police procedure show, and then it mashes them together into a fine paste. This is a game that has you playing as cops with mutant abilities solving crimes that involve the mutant populace. The setting has a nice gritty feel to it, really pushing the drama that police shows tend to evoke.

What really sold me about Mutant City Blues isn’t the art (which is good) but the writing. The running narrative through the book along with the setting they penned is enough to grab you by the neck and pull you in. And with the rules being fairly simple to follow (it uses the Gumshoe system with a few twists!), you wonâ€™t have a problem reading through this book and remaining interested. 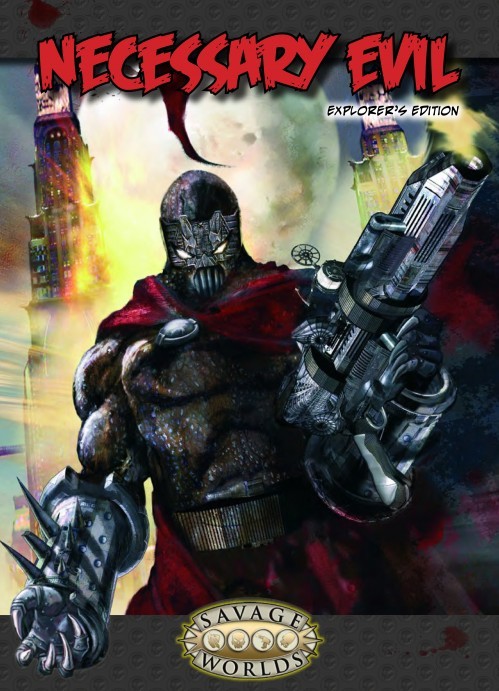 What happens when an invading alien race completely wipes out all of Earthâ€™s mightiest of heroes? Well, in order to keep Earth safe, the mightiest villains need to come to the rescue. True, they are only keeping it safe until they can eventually enslave mankind themselves, but beggars canâ€™t be choosers!

Necessary Evil by Pinnacle Entertainment Group uses the Savage World rules in order to let the players be villains who are stepping up to fill the footsteps of heroes. And while there is probably a fair amount of backstabbing and greed still going on, they need to put their difference aside (for the time being) in order to stop invaders! Who knows, maybe being a hero will cause them to reconsider their evil ways and change. That or theyâ€™ll simply remember everyone who patted them on the back and thanked them and have them tortured.

While I havenâ€™t gotten too deep into the PDF, I have really enjoyed reading the book. Itâ€™s nicely written, seems to be understandable, and I gotta say the cover art is simply sinister! If you like to be bad, then donâ€™t hesitate to pick up this book.

So, did I miss any superhero RPGs with unique settings? Think I was wrong about one I listed? Want to simply call me an amazing human being? Well, you can do all that in the comments!