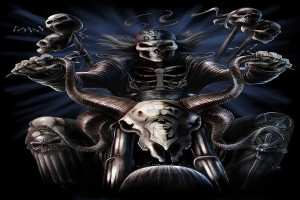 There are moments where you, as a GM, can look upon your work and realize you’ve created perfection. A scenario or NPC which will define a game and live on in RPG history. For me, that moment came in the form of the greatest monster my players would ever face in our Rotted Capes campaign. A being of musical talent and creative villainy known as Glory Hog.

Readers, you must be asking yourself, how could such a being be created. Surely, such genius was birthed through some intersection of fate and lightning. Some miracle that must have birthed an idea within the unworthy head of yours truly. No dear friends, such genius was born simply of an idea. A idea that grew from a kernel to a godly creation. An idea that would rival villains such as King Koopa of the Super Mario Movie or even, dare I say, Sho’nuff, the shogun of Harlem.

The being known as Gloryhog came to me from the need for levity in the game. Something fun to fight, and maybe stick around for a bit as the players progressed through the story. The players would be dealing with zombies, starvation, and losing valuable people anyway, so putting in something to lighten their mood seemed necessary.

Naturally, in a superhero setting, the most important aspect of a character is a name. Everything is defined by that choice and helps define a character. Did you ever wonder why Batman is remembered and Catman is barely a footnote? Because bats can strike fear into your heart and cats can go screw themselves. Wise words written in a book somewhere.

I honestly didn’t know where to begin. I went through random names and phrases, both used and unused. The problem with superheroes is it’s hard to find one that hasn’t been already taken by a random comic book, novel, or movie. I mean, how can you beat names like Matter Eating Lad or the Absorbing Man? I was trying to mimic the minds of giants. It was in a moment of frustration that the name came to me, Gloryhog.

From the name came the easiest character creation I’ve had in a long time. First, was the hog. From hog you get pigs, from pigs you get bacon and from bacon you get motorcycle bikers. The villain was a biker, but he couldn’t ride a regular bike. This was a superhero game after all. A true biker would put all of his sweat, blood, and tears into his bike. He is defined by it. Thus, the bike was the main power. Everything else about him was just regular old fleshy human. The next was the Glory. Glory and praise from talent that probably didn’t exist. Instead, he was an arrogant jerk who always tried to grab the attention he thought he deserved, but who was too stupid to know how incompetent he really was. In a few minutes, Gloryhog, was born. After a few more minutes, I had his back story.

Before the zombie apocalypse, Cliff Maynard was a rock musician trying to make it big and see his name in lights across the world. Sadly, at least to him, the rise of pop music prevented people discovering his true genius. How could he compete with people like the telekinetic T-Sync boys or the sonic girl duo known as the BOOM BOOM TWINS? He also had to deal with harsh criticism of his singing from those who didn’t understand his style. His voice was unique, not grating. His guitar work was inspired, not fumbling. His solo band, YAAAAAAAA, was simply decades ahead of its time. Still, he knew his name would be in lights someday. Till then, he worked at his dad’s auto body shop, repairing cars and dreaming big.

One day, his prayers were answered. A asteroid fell from the sky, leaving a mass of molten metal where his shop use to be. Sadly, also killing his father and most of his coworkers. Thankfully, fate determined that Cliff would be skipping out for an hour to grab a smoke and listen to some Ozzy. Â Coming back, Cliff was shocked by the destruction of his dad’s business, wishing it had at least happened after pay day. As he stood there staring, metallic cables lashed out from the molten mass, wrapping around Cliff and snapping into his brain. The molten mass was an alien warmachine and it was determined to access Cliff’s memories for information about Earth. But it had made a mistake. Cliff, unbeknownst to it, was a latent technopath. The machine didn’t have a chance as Cliff’s mutant ability began to take control. The machine’s mind became corrupted by poorly remembered musical lyrics and harsh melodies and it drowned in the chaos of Cliff’s mind.

Cliff gained full control of the mechanical beast and unconsciously turned it into the bike of his dreams. Cliff knew he now had his edge and could become a sensational rock god, but he also realized he could rob people with giant alien guns. As history has shown us, dear reader, Gloryhog made his choice. He became a great annoyance to superheros for years to come.