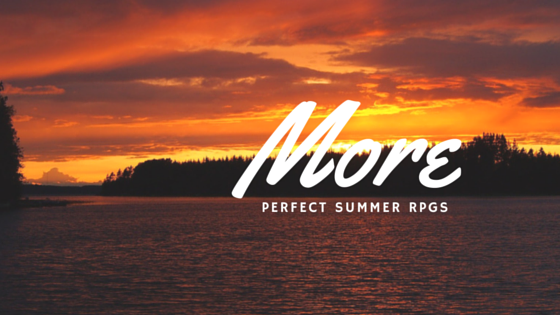 It’s been two years since I first published the list of the 5 Best Summer Role Playing Games, and A LOT of new games have come out since then! So as New York waits out another interminable heat wave (hello heat dome – now does that sound like a wizard’s spell or what?), here are 3 more summer rpgsÂ to get you and your friends through the never-ending summer.

Why? Re-live your glory days as a kid avoiding adult intervention, and solve mysteries along the way

When I watched Stranger Things with Billy this summer, I knew within just a couple of episodes exactly what system would go best with that story: Bubblegumshoe. You’ll hear Fandible’s first foray into this game soon (and it’s nothing like Stranger Things this first time out. Patience.), butÂ if you’re unfamiliar with it, Bubblegumshoe perfectly emulates the teen detective story. The book hasÂ variations that let you tell everything from Encyclopedia Brown to Scooby Doo to Veronica Mars. Like all GUMSHOE games, the focus is on unraveling a mystery, and the bookÂ actively dissuades you from engaging in physical combat. If you’re weary of all of the violence in the world this year, Bubblegumshoe is an exciting alternative. ItÂ still allows for lots of dramaÂ (with the intriguing Throwdown mechanic) while keeping fists down and knives sheathed.

Why: Summer is the best time for disaster flicks

The last time I put together this list, I included Fantasy Flight’s Warhammer 40K, because you need a summertime replacement for text books. This time I include an FFG game that is almost Warhammer’s total opposite. The End of the World games are thin volumes, with half of the text dedicated to the fairly-light rules system, the latter half detailing five different versions of the apocalypse (and post-apocalypse, should your characters make it that far). Put your terrifyingly average friends in the way of zombies, aliens, or the wrath of Mother Earth, and depending on your group the tone can waver from delightful B movie to gritty horror.

Why: Explore strange new worlds and civilizations in a techno-fantasy setting

The Fandible Longshot Numenera campaign has run for several months now, and as we’ve settled into this game for the long haul, I’m delighted at how well its handling four very different characters. This is another game where the focus is on discovery rather than combat (thoughÂ combat is built into the mechanics). Even though your characters live in the Ninth World, it’s such a strange place there’s always something new to discover. It’s like playing Pokemon Go, only instead of discovering the hidden history of your own backyard at Pokestops, you’re re-discovering the history of eight prior civilizations.

If you’re not playing Pokemon Go when you’re not role playing, you’re totally missing out, btw.

What’s your perfect summer role playing game? Tell us in the comments below!