Supergirl is the Best Show of the Fall 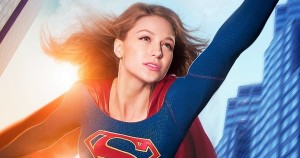 Iâ€™ve noted before that superheroes are taking over TV, and between the newly re-named Green Arrow stepping up in Star City, The Flash opening up interdimensional gateways to release new superheroes and villains, and the Agents of SHIELD having some honest-to-goodness supers on the team now, itâ€™s never been more true. And now we have Kara Zor-El, aka Supergirl, on screen every week.

And I have never been so excited to sit down and watch a TV show in my life.

I was apprehensive about Supergirl going into the pilot, and I heard some mixed reviews, but the positives outweighed the negatives, so I decided to give it a shot.

And five seconds in I was grinning and cheering. Because within those five seconds, the show signaled that this was going to be a very different kind of superhero story. Not only was our hero a girl this time, but her mother was going to be her inspiration. Think about all of the other stories you know: how often is it a woman that gives the mission? From Uncle Ben inspiring his nephew with the warning that â€œWith great power comes great responsibility,â€ Superman and Jor-El, Luke and Obi-Wan, to TVâ€™s The Flash and the cadre of fatherly men who inspire him – heroics are a manâ€™s game. Even when women come into their own, as Daisy has in Agents of SHIELD this season, she looks up to Coulson and takes the name her father insisted on calling her. So to hear Alura give Kara the familiar speech about going to Earth to be a hero and protect her baby cousin was immediately a refreshing twist on the call to adventure.

Over two episodes the show has continued to place Kara and her relationships with women front and center. She has a big sister (who happens to work for a super-secret government agency to protect the world from aliens). Her day job is as the assistant to the female head of a media empire. And showrunner Greg Berlanti continues to show he knows how to learn from the foibles of his other superhero TV shows, and rather than drawing out the mysterious big bad, shows us right away that the man behind the curtain is in fact a woman, and in episode two Kara meets her aunt Astra, her motherâ€™s evil twin. The only time Supergirl isnâ€™t sharing the screen with at least one other woman is when sheâ€™s interacting with her two allies at work, Winn the long-time friend/suitor, and James Olson – yes, the famous photographer from the Daily Planet, who is also in National City to try to make a name for himself, this time without relying on a friendship with Superman.

Kara is immediately a competent superhero. Her powers are innate and have been with her her whole life. She hasnâ€™t flown in years, but it seems to come back to her as easy as riding a bike, and thereâ€™s an unbridled joy in the re-discovery of her abilities that we havenâ€™t seen since Toby Maguireâ€™s Peter Parker discovered he could web swing over New York City. Her sister is concerned about the danger Kara is putting herself in, but Kara is excited to finally embrace who she really is, and follow in the footsteps of her famous cousin.

The casting is top notch. Melissa Benoist is Supergirl – relatable and charming whether sheâ€™s hiding behind thick glasses or going through a montage of costumes to become Supergirl. Calista Flockhart is channeling her best Miranda Priestly impression (and trying her best to deliver straight some of the clunkiest dialogue in the show). Mehcad Brooks has shown great range in just two episodes as James Olsen, showing he can simultaneously be a famous big city photographer with an even-more-famous super-friend and yet internally heâ€™s battling imposter syndrome, wondering if heâ€™s only a famous photographer because of that friendship. And while sometimes scenes between Kara and her sister Alex get bogged down in exposition, Chyler Leigh and Melissa Benoist have great chemistry as the Danvers sisters, and when the script lets them just be sisters, itâ€™s one of the greatest relationships in the showâ€™s short run.

There are a lot of superhero shows on TV right now. Four are airing right now, two spin-offs are in development, and of course Agent Carter returns in January. Are we heading for superhero burnout? Well, if we can survive multiple and extremely derivative crime procedurals, I think the superhero genre can hold itself up for a bit longer, especially if they keep giving us interesting leads like Supergirl.

1 comment on “Supergirl is the Best Show of the Fall”