I’ve Created a Monster: the Shellycoat 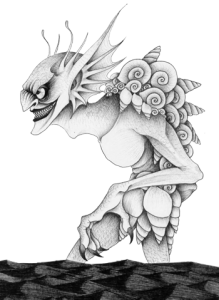 Creating monsters might be my favorite part of being a GM at Fandible. Looking up and modifying strange creatures and gods who might bring about an interesting challenge for my players is more satisfying than merely relying on a pre-generated bestiary. In a game like Unhallowed Metropolis, I can take this impulse to a new level, now that I am out of the games original setting, Britain. In lands not covered by the core book, I can use my imagination to create twisted versions of local folklore. In the recent episode False Perceptions, I had fun creating the creature that came to be the Shellycoat.

Strangely enough, the Shellycoat, as it was portrayed in the game, didn’t start with the monster. It actually began with wanting to mess with my playersâ€™ emotions. I thought it would be an interesting roleplaying challenge, and allow for some hidden aspects of their characters to come to light that normally wouldn’t be easily seen.

My first thought was some sort of psychic field, an area in the Wastes where their emotions are heightened. The issues with that were twofold: danger is limited to a specific area, and it seemed too much like magic. If the area is limited, the Â players could simply walk away from the encounter, a very boring solution. And while Unhallowed Metropolis is a fantastical place, its creatures follow the rules of science. A twisted and malevolent form of science, but science nonetheless.

So, I thought of something more biological. Perhaps a colony of parasites infecting the members of the group. The question then is why. Why would these creatures modify their victimâ€™s emotions as they ate? Â Could they use emotions to try to infiltrate a group? No, I’ve already done that with the Nightravens. Besides, the mind control aspect might interfere with the playersâ€™ role playing.

I was stuck for awhile until that savior of all GMs, Wikipedia, gave me a suggestion. The Shellycoat, according to Scottish folklore, is a creature that waits in rivers for travelers to fall into their traps. Now, in the Wastes, it’s doubtful you would find many creatures, especially humans, who wouldn’t be super cautious around any body of water. So, the Shellycoat has to find a way for its prey to come to it. The emotions induced by the parasites don’t allow them to think clearly as they are subtly guided to the Shellycoat’s location.

With the basics of the creature established, The next question was what emotion to emphasize? I decided it had to be an easily recognizable emotion: rage, doubt, fear, guilt. But it also couldn’t be limited to one emotion for the entire party – thats just boring. So, I made a list that the players could choose among themselves. That worked wonderfully.

The final consideration in the creation of the Shellycoat was that for this to work, there had to be an unaffected party member. A confused player who would have to try to contain these soon-to-be-emotional-wrecks. Each player has great role playing range and I couldn’t decide who might be left out of this emotional downward spiral. Thankfully, the previous fight with the Mare made the decision rather easy. Since David was the only one infected by the illusion-inducing Mare, he would be the only one not infected by the parasites. As a bonus, it possibly establishes that damphirs are unaffected by the Shellycoat. Itâ€™s an accidental canon that helps to color the world, especially as we stray farther and farther from the original canon setting.

Like all best laid plans, there was one part of the Shellycoat plot that was radically altered during the game. I had originally planned for the Shellycoat battle to be a bit more challenging for the players. As the game progressed, I realized that the unlocked emotions, and not the Shellycoat itself, were much more interesting. By the time my players reached the river, the Shellycoat of my mind changed from a tough monster battle into a simple predator that hightails it out of there at the sight of its own blood. Besides, the players had enough to deal with a rage fueled Moira running around.

I hope this glimpse into the thought process of monster creation helps you think of your own dark abominations of science. Are they any dark creations you guys are particularly proud of?

As an additional note, as I was looking into Shellycoat lore, Â found a German punk band you might want to look at. It doesn’t have to do much with the article, but sometimes you want to listen to some punk rock as you explore the Victorian Wastes. Meet Shellycoat

7 comments on “I’ve Created a Monster: the Shellycoat”